BRUSSELS (Reuters) – The European Union is considering ways to help Prime Minister Theresa May convince the British parliament to back the Brexit treaty she agreed with EU leaders last month but ruled out on Monday any change to the deal.

EU sources told Reuters that senior officials in Brussels are discussing whether and how to issue “reassurances” that might help May overcome resistance to the deal before lawmakers vote in London next week.

U.S. Secretary of State Mike Pompeo told CNBC he hoped the EU and United Kingdom could find a way to avoid “negative ramifications from a hard Brexit related not only to commerce and trade, but importantly to the national security issues that we have with the British as well as the European Union.”

Among the reassurances EU officials were considering was a request they said May put to fellow EU leaders at a summit before the Christmas break, on Dec. 14, to commit to having a new UK-EU free trade treaty in place by the end of 2021. However, the European Union shows no sign of going beyond an existing aspiration to do that, not a hard promise.

The backstop would bind Britain to follow EU rules to avoid a “hard” customs border across the island of Ireland unless a better way is agreed to do that by means of a new trade pact. Critics of May’s deal to smooth Britain’s passage out of the EU on March 29 say the backstop could leave Britain subject to EU rules indefinitely, long after it gives up any say over them.

EU officials familiar with the discussions said they saw little sign of any shift in the position of EU leaders last month, when they said the agreement could not be renegotiated and they would make no binding commitments that could be construed as altering it.

“We can provide reassurances,” one official said. “But whatever it might be will just reiterate the (summit) conclusions from last month.”

Among ways in which the EU could offer more detail and clarity on its agreed position, officials said, would be an exchange of legal letters with the British government setting out expectations of when a trade deal could be completed. However, EU leaders are wary of introducing legal ambiguity if the language of any statement differs from the original text.

The EU executive repeated on Monday that leaders would not renegotiate the treaty and said it was pressing on with planning for Britain to crash out of the Union without a deal.

“The deal that is on the table is the best and the only deal possible,” the European Commission’s chief spokesman Margaritis Schinas told reporters when asked about a phone conversation on Friday between May and Commission President Jean-Claude Juncker.

“This deal will not be renegotiated.”

He also repeated that there were no talks planned between negotiators from the two sides as “negotiations are complete”.

Schinas said that Juncker’s conversation with May on Friday was “friendly” and that the two would speak again this week. May also spoke last week to EU summit chair Donald Tusk. 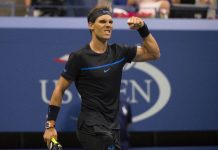 Rafael Nadal into US Open third round

Manchester City battle back for crucial win over Chelsea